Return to running after injury (IT Band Syndrome)—Physiotutors Andreas Heck

Half marathon preparation, injuries, and the rehab process

Check out this full case insight video provided by Physiotutors CEO & Cofounder Andreas Heck, where he elaborates on how he used Runeasi to identify  and correct his weakest links.

Andreas integrated Runeasi bio-feedback mode with real-time readings during his rehab process. He discovered a novel cue that improved both his symptoms and his pelvic asymmetry readings while running. Here is a video transcription from minute 14:30 onwards where he explains the process:

“I wanted to find out if anything changed in my running form after 2-to-3 kilometers. That’s when I thought I’d give the Runeasi wearable a shot. I set it up on our office tablet, hopped on our treadmill, and started an analysis in biofeedback mode, which, would give me real-time feedback on parameters such as impact magnitude, impact duration, ground contact time, cadence, and dynamic instability.” 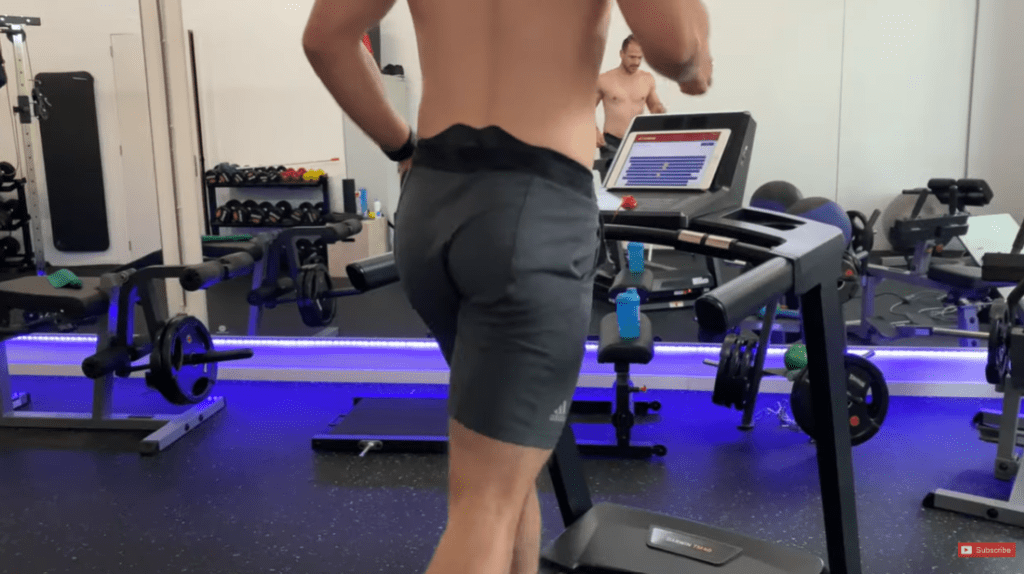 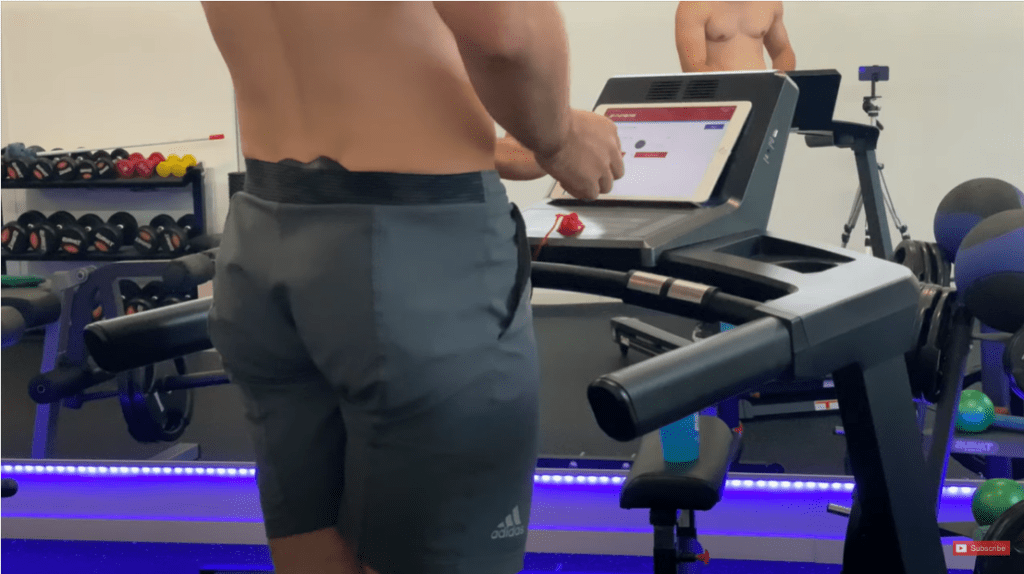 “So while I was running, I cycled thought the different parameters to see if anything was noticeable. I could already see that the impact was higher on my right side, to which I thought, hmm, maybe I’m subconsciously already taking load off my left leg already. But, it was only a minor difference.

However, looking at the data on dynamic instability, I could notice while approaching ten minutes of running, that there was a noticeable difference in the reading between my left and my right side, which coincided with symptoms arising in my left knee. This was identical to what I felt on the road as well.

This was when I was trying out different cues to see what could change my symptoms, as well as the readings on the tablet. My cadence was alright, so shortening my strides wasn’t an option. I tried different hip width, but that didn’t work either. But when I tried a different hip strategy, as in the stork exercise you might be familiar with during ground contact, this seemed to do the trick. I was actively focusing on engaging the lateral hip muscles, effectively locking the hip. This led to a decrease in the readings of the wearable as well as improved my symptoms.” 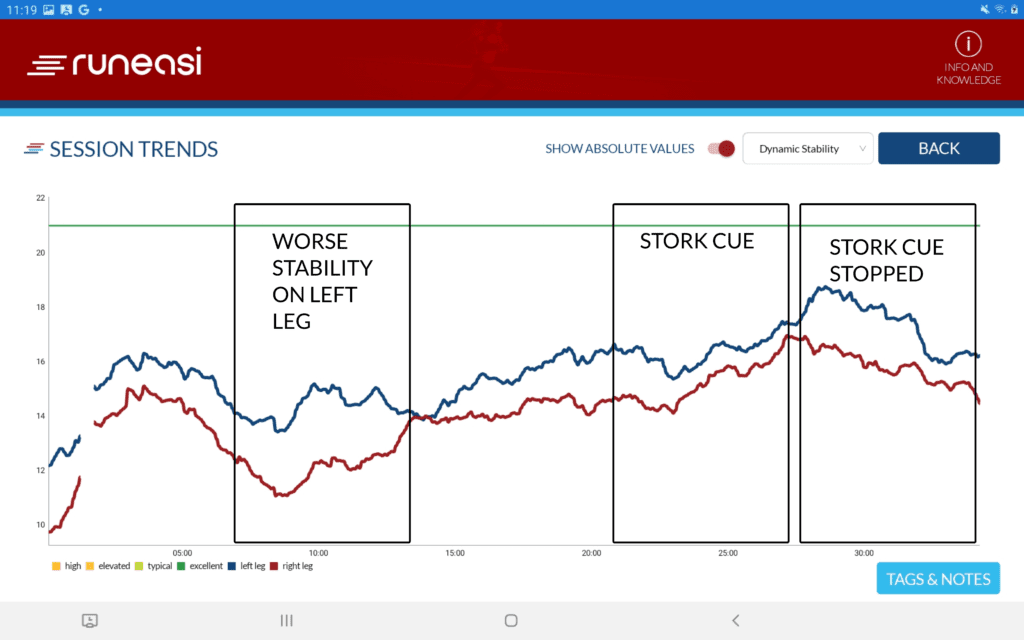 "The missing piece in my rehab puzzle"

“This was an eye-opening moment, because when I stopped the strategy, symptoms would return and the readings on the app would reflect it too. And, when I focused on deploying my newly found strategy again, they changed for the better. I felt confident that I had found what to work on to get my mileage back up, without aggravating my symptoms in the process. Personally, this was very valuable information, as this appeared to be the missing piece in my rehab puzzle that I otherwise wouldn’t have found out about.

I was doing progressive strength work, as previously explained. I had good strength markers. I included plyometrics, and, I included a graded return to running. But, the latter just didn’t progress as I wanted it to. I know that rehab is not this linear process, but I was making good strength gains. But, my running distance just didn’t want to catch up.

I usually don’t get a lot of muscle soreness anymore after training, but the day following my running analysis session, where I found this new hip strategy, I could really feel soreness in my lateral hip muscles. For me, that was an indicator that I may have found a weak link in my running biomechanics which I will need to work on.

What did I do as training for my return to running? I just went running. But, I focused on my hip strategy to “engage my hip muscles” more specifically during the ground contact time of my stance leg. Yes, I know I can be strengthening my hip muscles with exercises, but I was doing that already. I’m doing double and single-leg exercises and gradually overloading them as well. But, the cyclical nature of running is different to the more static gym-based environment. So, I focused on training my form during running, and this allowed me to finally break through running, 5,6,7,8, and now closing into running 10 kilometers again, at a reasonable pace, and without flareups of my knee pain most importantly.

I am not symptom-free, but the symptoms don’t prevent me from finishing my runs or my ADLS and they calm down within 24 hours. I don’t feel this sharp pain anymore, but more of a pressure-like feeling, if at all. You could say that I’m poking the bear, but I’m not waking it up.” 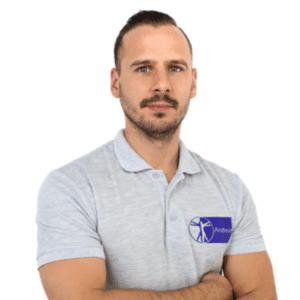 As Co-Founder I take pride in the global impact Physiotutors has on defining standards in online physiotherapy education. I continue to go to work motivated daily to build a meaningful platform that meets the learning needs of physiotherapists of all levels.

If you already have a full picture of Runeasi, book a 15 min call to discuss possible next steps to start working with us.  If you would prefer to go in more detail to learn more about our parameters and the added value of our technology for your business, schedule a 45 min demo. If neither of these options are what you are looking for feel free to send us a message instead and we will work something out together.

5 rEASONS TO USE OUR APP

Track and improve your client’s Runeasi running quality. Identify their weakest link with our advanced visualisation. 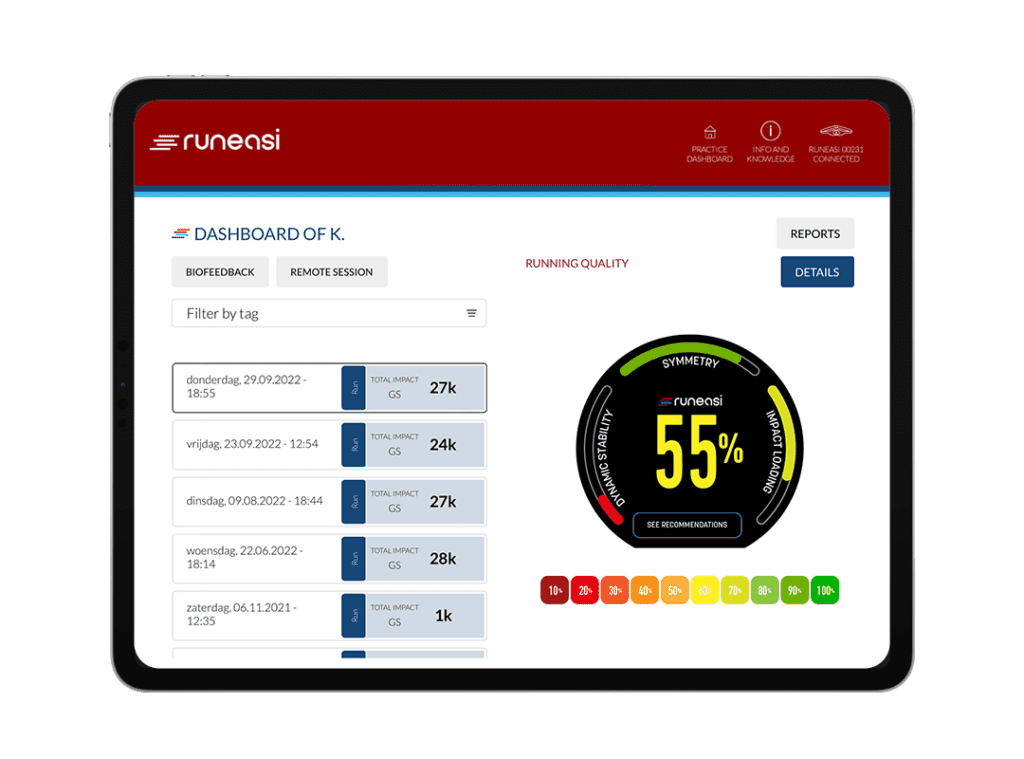 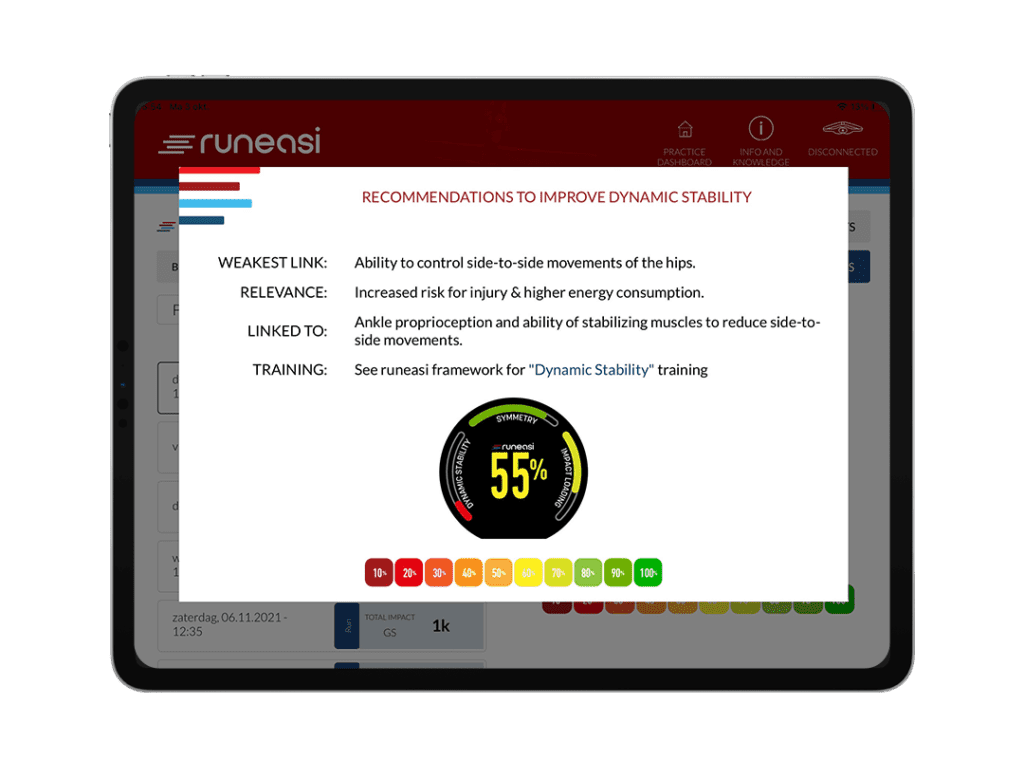 Get individual training and cueing recommendations to improve your client’s weakest link.

Engage your clients through visual gamification and watch how they self-optimize to your verbal cues. 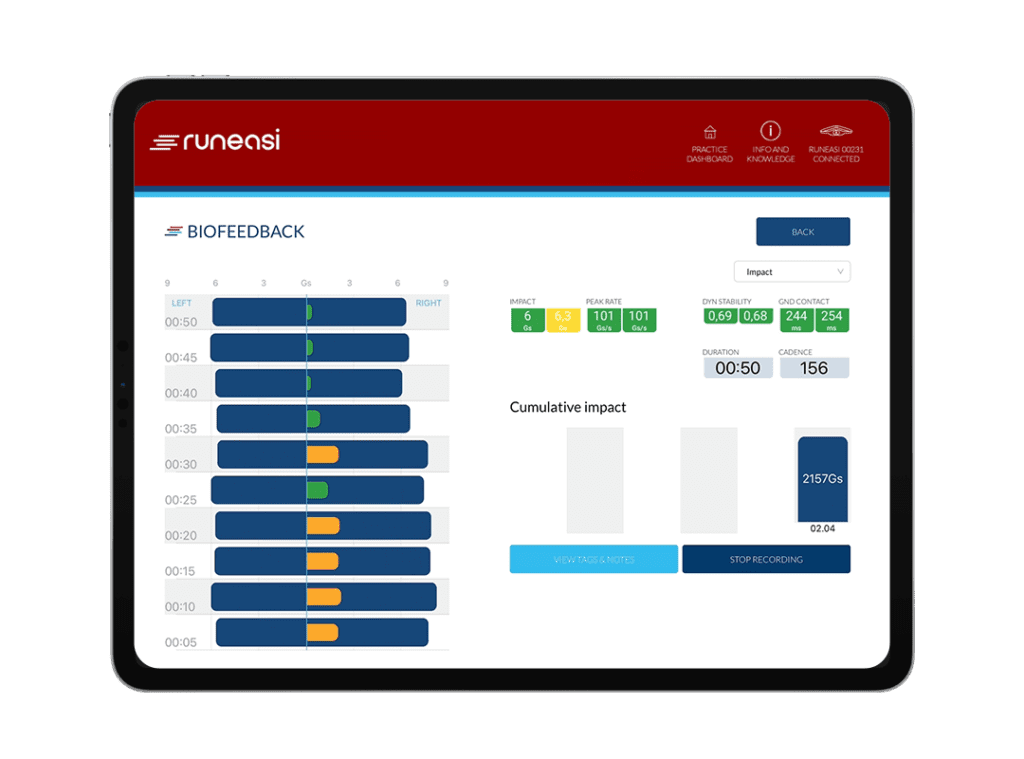 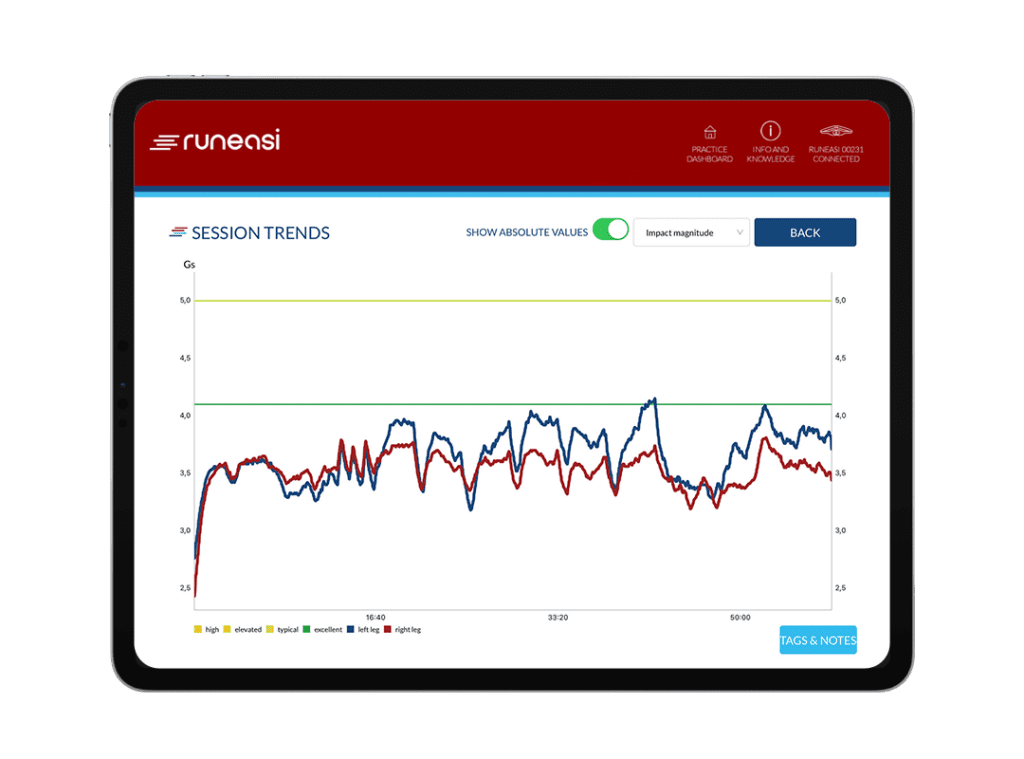 Learn more about your client’s running quality during daily training. Our session trends show when and where the quality drops with fatigue. 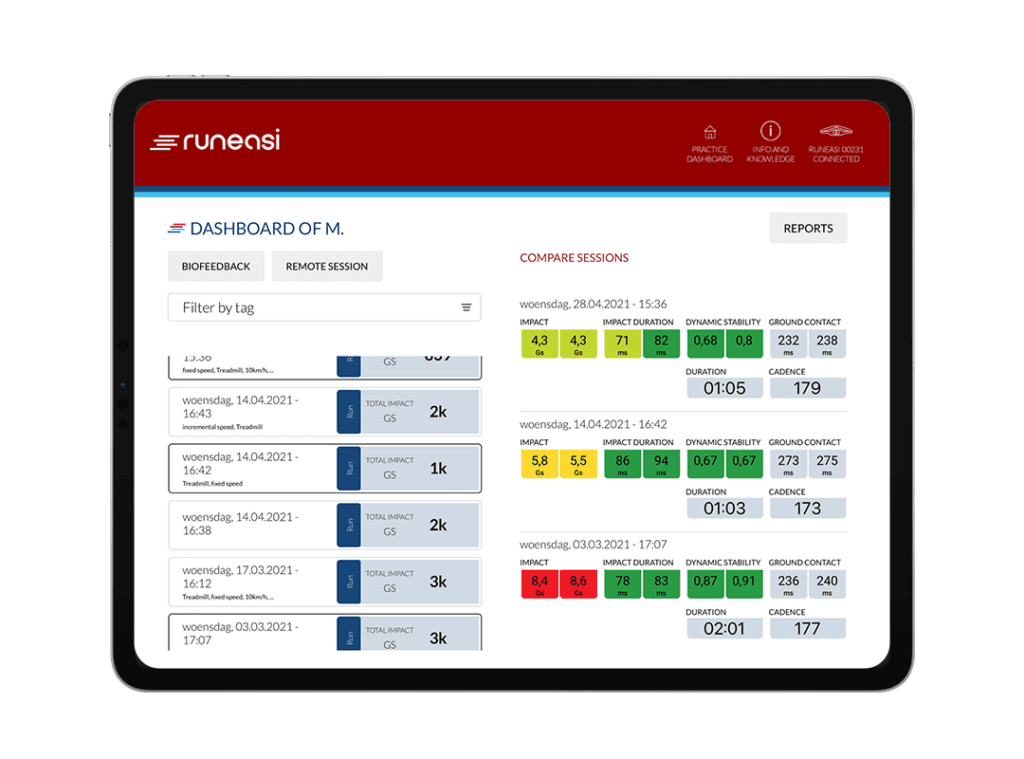 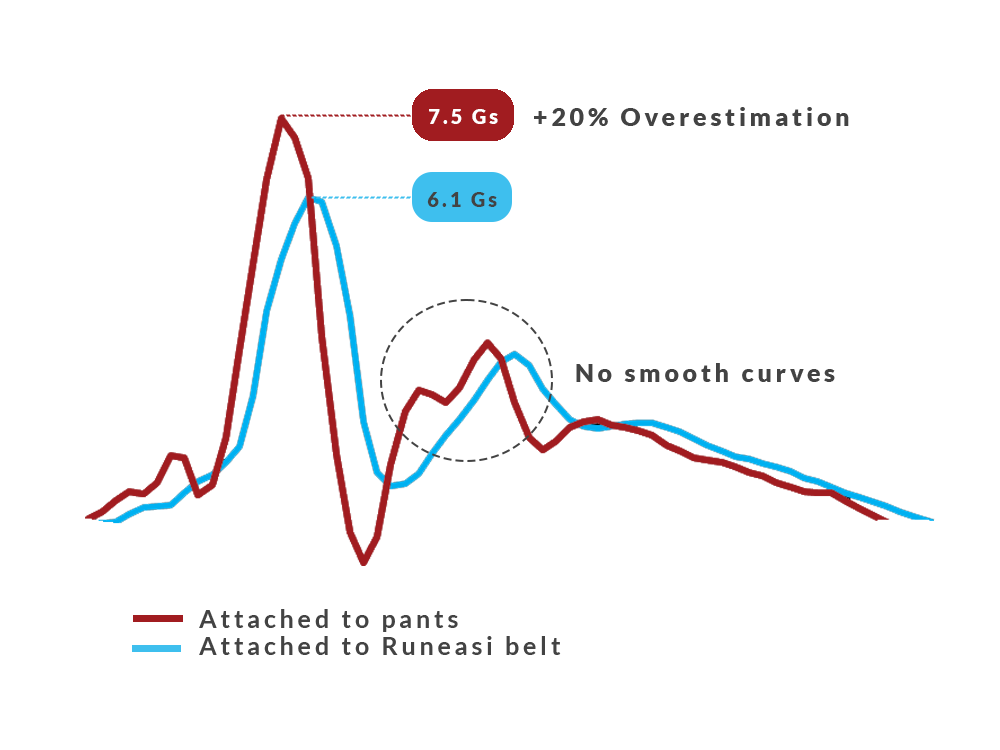 1. No motion artifacts. The Runeasi belt is secured tightly against the body and the skin to capture the actual movements of the body’s center of mass. Attaching or clipping the sensor directly to the pants would allow the sensor to wobble from side to side (i.e., measuring the wobbling of the pants, and not the human body.

2.  Easy to standardize the sensor’s positioning. The Runeasi belt makes it easy to consistently position the sensor close to the center of mass. Attaching the sensor directly to the pants would dramatically affect the reliability of the outputs as the height and tightness of the pants will affect the results. Moreover, these pants attachments often shift sideways while running which further decreases the data quality.

3. Comfortable to wear.  Hundreds of runners confirmed that they immediately forget about our belt while running. This allows them to move without any restrictions and allows us to capture movements that are representative of a client’s true biomechanics.

Built to withstand high intensity training and sweating. Suitable for the outdoor elements, come rain or shine. Robust to handle the repetitive and ruthless impact shocks of running. 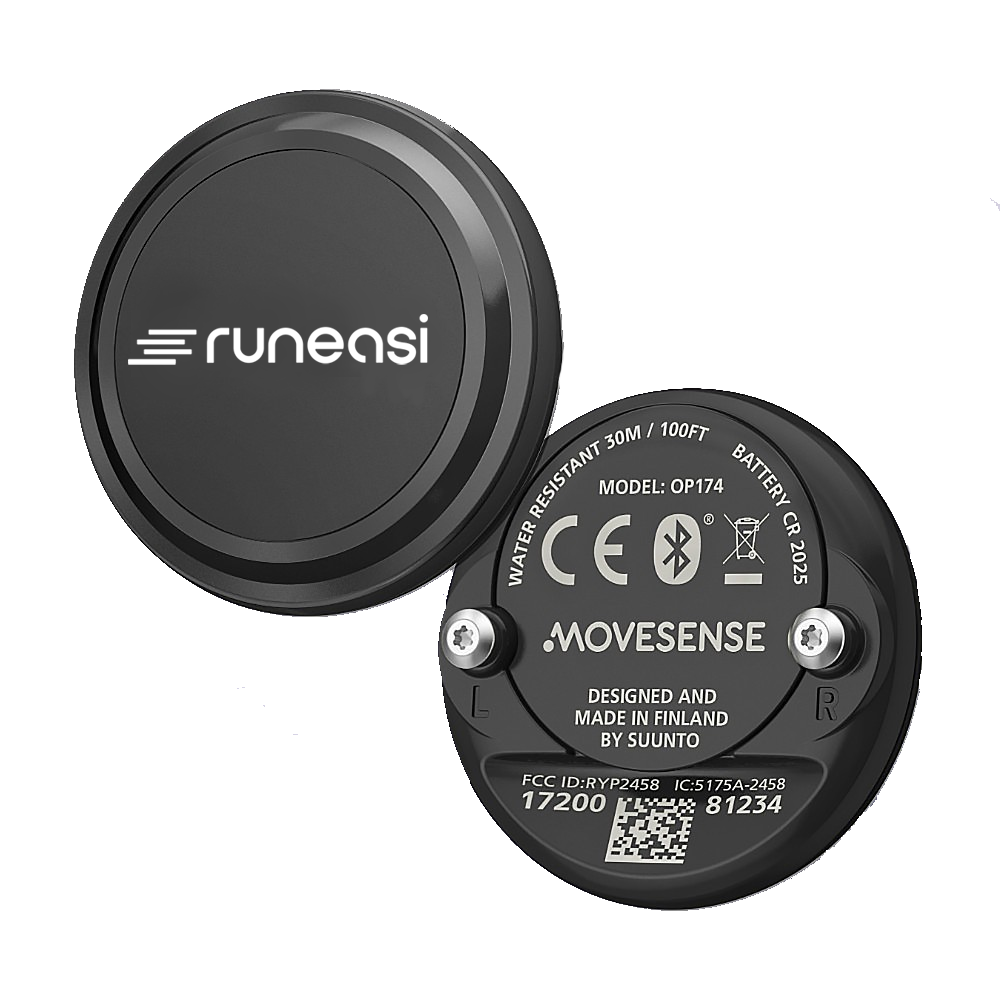 Replaceable coin-cell battery with operating time up to months, depending on the usage. Bluetooth® 5.0 radio for effortlessly transmitting data real-time or post-session.